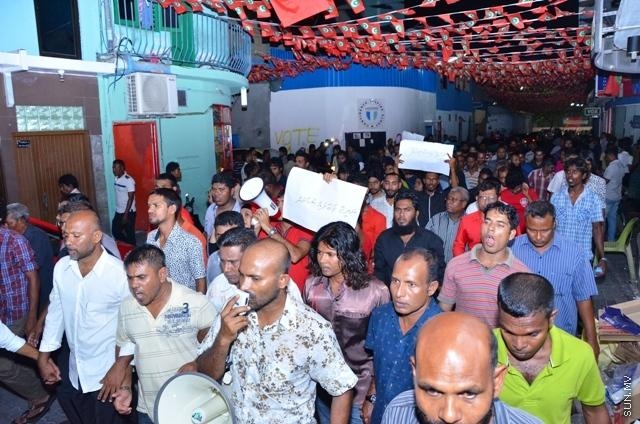 Supporters of Jumhooree Party (JP) have held a protest outside the residence of Elections Commission President, Fuad Thaufeeg, claiming irregularities in the result of the first round of presidential election voting held on Saturday, 7 September.

The group, after a JP rally last night, moved on to Fuad Thaufeeg’s residence located near the Water Building. The protest was led by Fuvahmulah MP Shifag Mufeed, who joined JP recently.

The few protesters called for Fuad Thaufeeg’s resignation, and claimed that the presidential election result was rigged.

Earlier yesterday, JP filed a case questioning the election result to court, but the case was rejected by the court.

The Commonwealth Observer Group that observed the election in the Maldives said that there were no questionable incidents surrounding the election that would affect the result.

Foreign national attacked in the head with scissor