Letter against voting for Nasheed was tweeted by Riyaz in his personal capacity: President Waheed 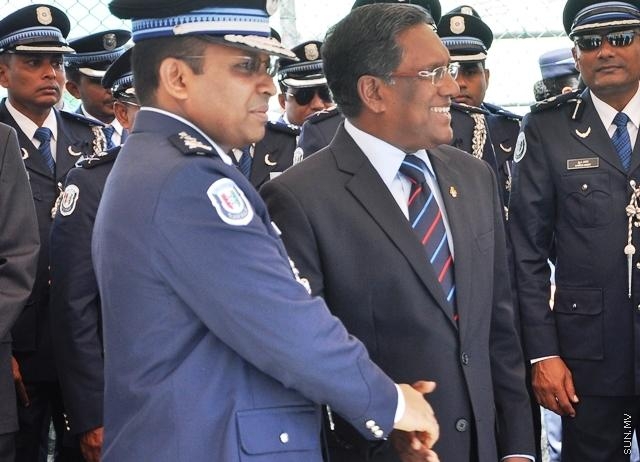 President Dr Mohamed Waheed has said that “it is possible” that Commissioner of Police Abdullah Riyaz tweeted the letter, sent by someone asking people to “say no” to former President Mohamed Nasheed in the upcoming election, in his personal capacity.

Article 69 (b) of the Police Act states that it shall be an unlawful activity for any police officer, even in his personal capacity, to commit or engage in any activity that will create doubt in the minds of members of the public regarding the police officer’s ability to carry out his duties with fairness.

In response to a question posed by Sun Online upon his return from Fuvahmulah today, President Waheed said that it is not like the police commissioner to have done something like that, and that if Riyaz has agreed in front of the media that he posted a letter on twitter sent by someone asking people not to vote for Nasheed, he probably did so in his personal capacity.

When asked if it is acceptable for the commissioner of police to have carried out such an activity, President Waheed said that he can only comment on the matter further after obtaining more information.

Meanwhile, the Police Integrity Commission (PIC) has initiated an investigation into a case filed by the Elections Commission, accusing Commissioner Riyaz of making political remarks to influence the presidential election.

It has not been possible to get Riyaz’s comment on the issue, as there was no answer on his phone at the time of press.

Riyaz told Haveeru that he simply “tweeted a letter sent by someone”, and that he “did not intend to achieve anything” by doing so.

The letter tweeted by Riyaz states that Nasheed is pretending to be compassionate towards the police because he might lose the election in the first round. The letter describes Nasheed as “deceitful” and “wicked”, and asks people “say no” him in the presidential election in September.

President Waheed also expressed concerns over the discord between the Supreme Court and the parliament regarding the legitimacy of Mohamed Fahmy Hassan’s membership in the Civil Service Commission (CSC). He said that he hopes that they are able to solve the disagreements themselves.

Referring to the appointment of Dr Mohamed Latheef to replace Fahmy Hassan as the president of CSC today following the parliament decision that Fahmy’s CSC seat had become vacant, President Waheed said that he will ask for advice from the Attorney General and other relevant officials on how to proceed with this matter.