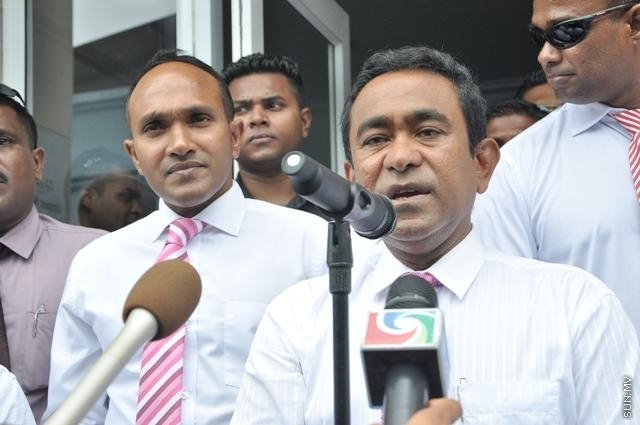 Progressive Party of Maldives’ presidential candidate Abdulla Yameen has said that the death penalty is necessary to save the society from crime.

Yameen made his statements speaking at a program - “Abdulla Yaameenaa eku Dhivehi Raajjeyge Adu” (Voice of Maldives with Abdulla Yameen).

He said that up until now, he had not been an advocate of the death penalty but said that he believes that its implementation is now necessary to save the society from the murders that have become much too common.

The death penalty should only be implemented if the sentence is upheld by the Supreme Court, he said.

“I have not been an advocate the death penalty. But I now believe, if it can be proven in trial so that the country accepts, if it is proven to a degree accepted by judicial principles, if all the steps are followed and if the Maldivian people believe, I believe that the death penalty is necessary to save the society,” Yameen said.

Stating that detailed legislation is necessary to implement the penalty, the current government's cabinet decided to propose a death penalty bill to the parliament.

The bill was drafted by the Attorney General’s Office and has been opened for public comments.

However, stating frustrations over the delay in proposing the bill to parliament, a separate death penalty bill was proposed to by Vilufushi MP Riyaz Rasheed.

The bill was rejected by the parliament on the 24th of July with a majority of 26 votes against and 18 votes in favour after a debate where MPs had stated that the bill was incomplete.