MNDF commences efforts to transfer people from Maafilaafushi to Naifaru 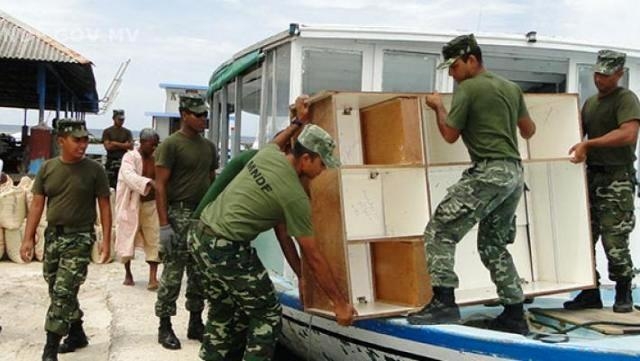 The Maldives National Defence Force (MNDF) has commenced efforts to transfer families from Lhaviyani Maafilaafushi to Lhaviyani Naifaru, for the purpose of relocation.

MNDF Media Official Major Hussain Ali said that these efforts were commenced yesterday following a request by the Lhaviyani Atoll Council, and that two families had been transferred to Naifaru so far.

“This entails hard work. Efforts have been ongoing yesterday and today, to transfer the families and their belongings to the island,” he said.

Major Hussain Ali said that more families will be transferred to Naifaru on Saturday.

MNDF said that the first phase of transferring people to Naifaru was completed today, and thanked the Lhaviyani Atoll Council and the people of Maafilaafushi for their cooperation.

About 80 people live in Maafilaafushi, which was earlier declared by the government as an uninhabited island, following which efforts began to transfer people to nearby islands in the atoll.