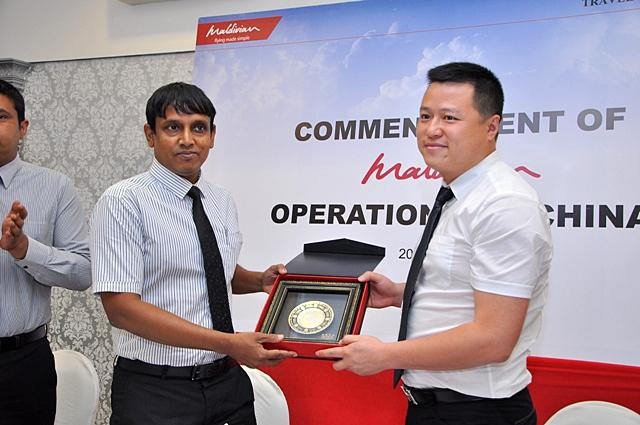 Maldivian has signed an agreement with a Chinese travel company to begin flights to Chengdu, China.

The agreement signed between Chengdu Universal International Travel Service and Maldivian will facilitate for the country national carrier to begin the flights to Chengdu on the 23rd of next month.

The agreement was signed at Nasandhura Palace Hotel. Managing Director of Island Aviation Services Abdul Haarish signed the agreement on behalf of Maldivian and the President of Chengdu Universal International Travel Service signed on behalf of the company.

Speaking at the ceremony, Abdul Haarish said that Maldivian is an airline that is now been open for the tourism market and that and that they cannot neglect prominent markets in tourism such as China.

Haarish said that Maldivian’s first destination in China will be Chongqing City and that this is the first flight for Maldivian carrier to make a trip to Chongqing. Proper market studies were conducted before making plans with Chengdu Universal International Travel Service and that the studies predict reasonable financial gain from the venture, he said.

President of the Chengdu Universal International Travel Service Pvt Ltd said that he believes that the new venture with Maldivian has a bright future and that the company will work towards broadening the business, if all goes well with this new initiative.

We will establish an internationally recognised polytechnic in the Maldives: Dr Jameel