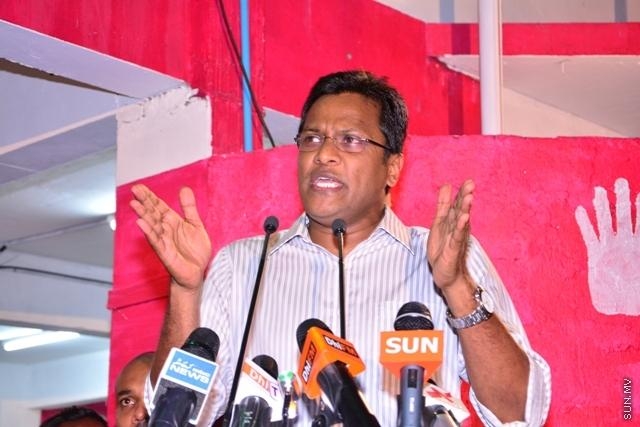 Progressive Party of Maldives (PPM) has sent the official notice of dismissal to Umar Naseer, terminating his party membership.

Maaz Salem, who was also Umar Naseer's campaign manager during the presidential primary, said that Umar has already decided to submit the decision to the court hearing tomorrow.

“We will submit the issue to the hearing tomorrow,” said Maaz Saleem.

Umar Naseer was dismissed after he refused to apologise for accusing his opponent of underhandedly manipulating the results the party’s presidential primary, statements he had made during an event following his defeat at the primary.

Maas Saleem said that the issue is currently being contested in court and that party’s decision to terminate Umar Naseer’s membership has resulted in irreparable damages to Umar Naseer himself, and his supporters.

“The issue of deceit and rigging the elections is currently in court. The court has not decided on the matter. Removing Umar Naseer from the party before the court made a decision regarding the deceit case has resulted in irreparable damage to Umar and his supporters,” said Maaz Saleem.

Also a former deputy leader of PPM, Umar Naseer was accused of a holding public event against party regulation soon after he lost the presidential primary, where he had accused his opponent Abdullah Yameen of underhandedly manipulating the election results.

The party’s behavioural committee’s decision to dismiss him follows his refusal to apologise, after the party repeatedly ordered Umar Naseer to make a public apology.

Umar Naseer was previously dismissed from his former party Dhivehi Rayyithunge Party (DRP) for staging a protest against party regulations, which was also contested in court. He then resigned from DRP stating that he does not want to continue his membership at the party, and lead the formation of Progressive Party of Maldives (PPM).