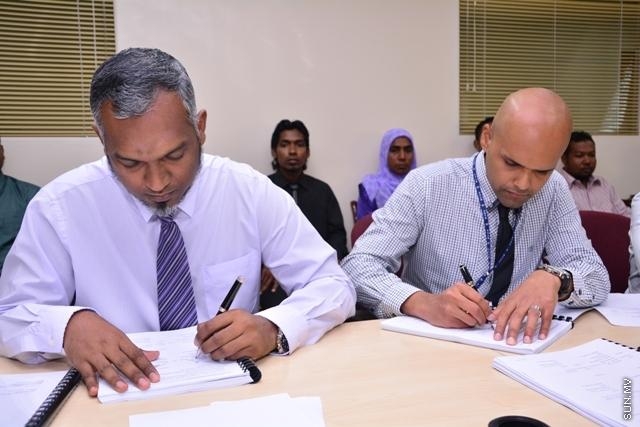 Ministry of Housing and Infrastructure has awarded a MVR 124 million project to the Maldives Transport and Construction Company Plc (MTCC) to construct harbours in four different islands in the Maldives.

The agreement was signed by the Housing Minister Dr. Mohamed Muizzu and Managing Director of MTCC Ahmed Ahmed Abdulla, at an event held in Housing Ministry today.

Speaking after the signing, Housing Minister Muizzu said that all four harbours are funded by the government and that he hopes that the people will be able enjoy their benefits and conveniences as soon as possible.

The harbour for Gaafu Alif Kondey, planned to begin this May, has a dimension of 300 feet by 200 feet and will cost MVR 25.8 million. The harbour for Haa Alif Vashafaru is of dimensions 500 by 200 feet, and will cost MVR 36 million, while the MVR 41.8 million harbour in Laamu Maabaidhoo is of 700 by 260 feet, and is scheduled to start this June. Gaafu Alif Kondey harbour will cost the government MVR 20.6 million and will see the renovation and exiting harbour, which is planned to begin during June this year.

MTCC said their goal would be to start the projects as soon as possible, and finish them before the stipulated deadline.

Finance has ordered us to halt all government funded projects: Housing