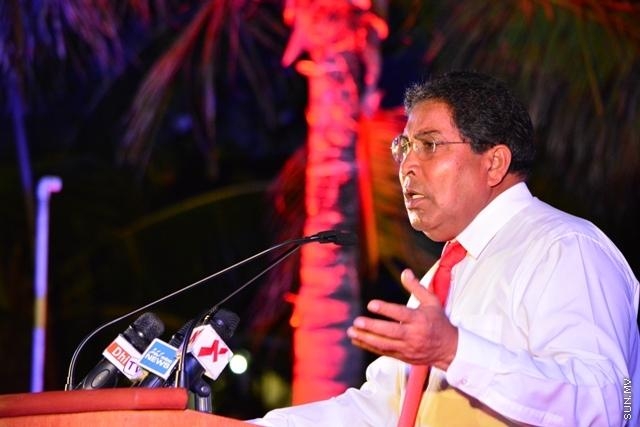 Leader and Presidential Candidate of Jumhooree Party (JP) Gasim Ibrahim has said that JP is prepared to form a coalition for the upcoming Presidential Election.

Gasim made this remark while speaking at a special rally held by JP last night.

He said that he and Umar Naseer recently met with President Dr Mohamed Waheed Hassan Manik to discuss forming a coalition.

“The other night, a few reporters took photos of Umar Naseer and me as we came out of the President’s residence. Later the news was published, and Umar Naseer had given a statement saying that we had been discussing forming a coalition. This is true,” he said.

Gasim said that he had also discussed the idea with Leader of Dhivehi Rayyithunge Party (DRP) Ahmed Thasmeen Ali.

He said that JP is prepared to hold discussions about forming a coalition with all groups who work for the benefit of the State and keep promises.

In spite of being prepared to form a coalition, Gasim has said that he will not act as someone’s Running Mate.

At last night’s rally, Gasim also spoke about the weakened relations between Maldives and India.

He said that India and Sri Lanka do not respect the Maldives as they used to, and that the current government is partly responsible for this.

He said that foreign workers in Maldives are not allowed to keep their passports in their possession, which is a concern for foreign countries. Gasim said that the Indian High Commission had shared its concerns in this regard with him.

ARC calls on government to ratify protocol on children