Efforts under way to win election in first round by forming broad coalition: Umar Naseer 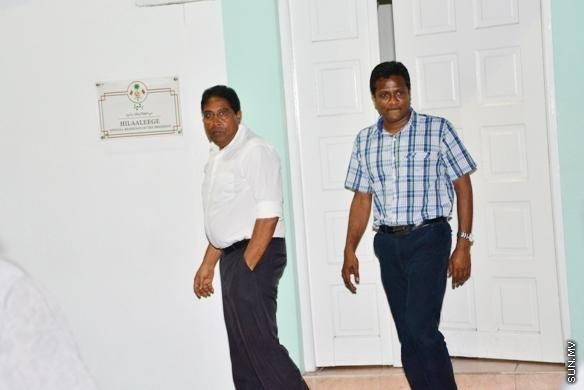 Umar Naseer has said that efforts are under way to form a broad coalition among the parties included in the present government to win the Presidential Election in the first round.

Speaking about the meeting attended by Umar and Jumhooree Party (JP) Leader Gasim Ibrahim at the president’s official residence last night, Umar said that discussions had been held during the Primary Election of the Progressive Party of Maldives (PPM) about forming a broad coalition, and that last night’s meeting was also about forming a broad coalition.

Umar said that efforts are under way to form a broad ‘national unity’ coalition among all existing political parties excluding Maldivian Democratic Party (MDP). He said that the purpose of this coalition would be to defeat MDP with a clear majority in the first round of the election.

He said that PPM is also welcome to join the coalition.

Umar said that the parties working to form the broad coalition want to appoint a candidate who would guarantee victory over MDP in the first round.

He said that several people support the idea of President Waheed becoming the next president, but this decision will be made after discussion among the coalition parties.

Umar said repeatedly during the Primary Election of PPM that existing political parties support the idea of a broad coalition.

The parties currently in discussion about forming a coalition are JP, Gaumee Itthihad, Gaumee Party, and Umar Naseer. It is not known if PPM and DRP, also part of the present government, have participated in these talks.

MPs may not agree with Supreme Court ruling, but it must be obeyed: Filza