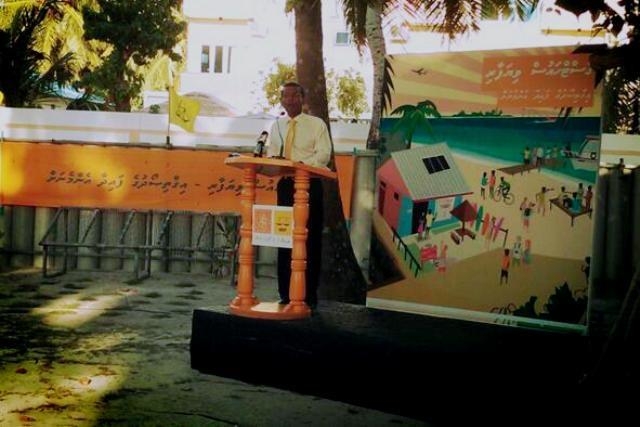 Maldivian Democratic Party (MDP) has announced its policy for guest-house businesses in the Maldives, aimed for the upcoming presidential elections.

The policy was officially announced at a ceremony held in Laamu Gan by the party’s presidential candidate and former president Mohamed Nasheed. The party also held events in varous locations around the country to mark the announcement of their new policy.

Speaking at the ceremony, former president Mohamed Nasheed assured that MDP will win the upcoming presidential election and that subsequently, the MDP government will introduce subsidized financial schemes and allocate plots towards further developing guest-house businesses.

“Our aim is for the individual citizen to be able to benefit from tourism. To develop this business to an extent where the poorest people living in the islands to truly benefit from this business. It is evident that opportunities would have been facilitated if guests had lived in the islands. We have seen that a normal food stand to get progress into a store. A profit of 5000 Rufiyaa turn into 25,000 Rufiyaa in profit, we have clearly seen this,” Nasheed said.

Nasheed said the islands will see a infrastructural developments along with the guest-house businesses. The former president said that under the new policy, the current number 22,800 guest-house beds will be doubled. He added that they also aim to introduce an additional 25,000 tourist beds.

Nasheed noted that the tourists need new facilities from the airport and that the Ibrahim Nasir International Airport will be privatized after the MDP comes to power. He said that GMR, the Indian infrastructure giant from whom the INIA was recently revoked, is still the best company to manage the Maldives central airport.

Call to promote guest-house businesses while having called for the boycott of Maldives tourism is concerning: Adheeb