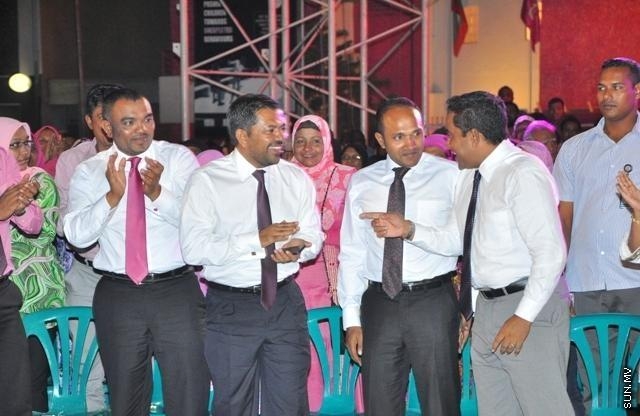 Shifaq said that the purpose of such statements were to damage Yameen’s credibility amongst his supporters.

Shifaq said that Umar’s team had made statements claiming that Yameen has bought overseas property of $1.7 million. Shifaq denied these allegations and said they are baseless.

“What they said saying that Yameen has bought flats worth $1.7 million from Singapore is not true. Yameen has no flats or lands or buildings, none overseas or in the atolls. So we view the purpose of these statements as to defame Yameen and change the way people think about him. We condemn such statements. That things got more personal, that they much more such personal statements than what we would have said about them, it is very worrying. The party’s leader (Maumoon Abdul Gayoom) has also adviced all parties to refrain from getting personal, and instead for both parties to try and gain support by putting their policies across to the members of the party. That’s how Yameen’s campaign is progressing,” said Shifaq.

He also said that Umar team has been spreading rumors that Yameen has made a deal with former President Mohamed Nasheed, claiming that Yameen had held meetings with Nasheed in the past.

“To justify this they say that Yameen had met with former President Nasheed. The truth is that Yameen has not met with Nasheed while Nasheed was in the presidency. Yameen met with Nasheed during the budget approval process for this year. MDP (Maldivian Democratic Party) was not inclined to pass the budget. They had no intention of giving space for the budget approval. PPM’s Parliamentary Group has always held back from political prejudices while working in matters that involve national interest. To achieve the goal. So Yameen met with Nasheed upon his request to discuss the issue. After consulting with the Parliamentary Group and with Maumoon’s advice too,” Shifaq said.

Shifaq said that Yameen’s Yageen team is quite certain that they will in the PPM presidential primary but said that even if Umar Naseer takes the lead, the team is willing to work behind him in the future.

PPM's presidential primary is scheduled to be held on the 30th of this month.