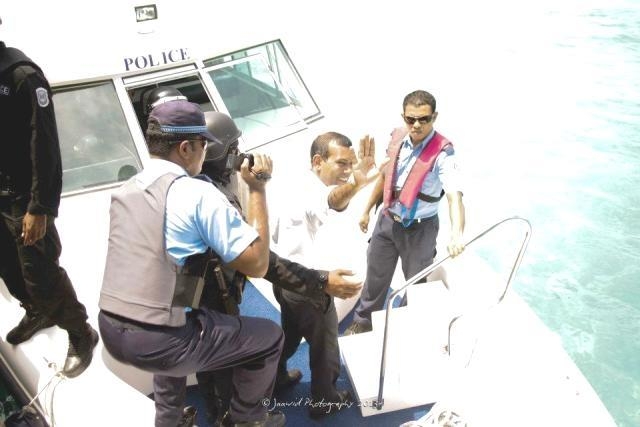 Police have arrested former President Mohamed Nasheed in order to produce him to his hearing at Hulhumale’ Magistrate Court tomorrow.

Police Media Official Sub Inspector of Police Hassan Haneef said that Police arrested former President Nasheed this at 1:30 pm afternoon following a court order by the Hulhumale’ court ordering them to produce him at a court hearing scheduled to be held at 4:00 pm tomorrow evening.

He said that Nasheed was arrested at 13:30 pm and that a police speed boat departed at 13:35, transporting the former President to Dhoonidhoo.

Sun news reported Murshid Abdul Hakeem has been attacked by some people near Kenaryge as he went to the area to cover the news regarding the arrest of the former President Mohamed Nasheed. Murshid's phone has been snatched from him.

Murshid has said that those who assaulted him has torn his shirt along with its buttons. He said that the incident happened near Kenaryge.

Former President Nasheed has been arrested from Kenaryge at around 1:35pm today, and taken to Dhoonidhoo - Media Official Hassan Haneef.

Attorney for former President Nasheed Hissan Hussain has told Sun the Nasheed was arrested against the law and that if a person is to be arrested, the person has to presented with the court warrant to arrest him.

"Even if arrested along with a court warrant, the police have to show the court warrant. But the warrant has now been shown, not to Nasheed, nor us. Police have also not allowed us to contact Nasheed. We have also requested for a copy of the warrant," - Hissan Hussain.

A large number of MDP supporters have gathered near the Male' City Council.

A person wearing a tie and passing by on a motor cycle was stopped by a crowd near Male' City Council, pushing him to the ground and assaulting him. He has now left the motor cycle and fled the scene.

The order issued by Hulhumale' court upon the Police to arrest Mohamed Nasheed stated that Nasheed failed to attend a court hearing regarding a case submitted by Nasheed to the court scheduled for the 04th of February 2013, and then on the 10th of February 2013, without any proper justification on both instances, and while the Police have stated that they were unable to execute the order they received from Hulhumale’ court to arrest and produce Nasheed to the court because he had chosen to stay inside the Indian High Commission, with reference to the article 5 (d) of the regulation on summoning people to court article 17 of the regulation, the court has ordered the Police to bring Nasheed under their custody and produce him to the court hearing (Justice Building hearing hall) on the 6th of March 2013 Wednesday at 16:00 hours.

Police have said that 4 policemen patrolling in Alikilegefaanu Magu was assaulted near rainbow shop around 1:50 pm and that another policeman was assaulted, at the same time, near Male' City Council. They said that a person accused of the assault has now been taken into custody.

In Majeedhee Magu, protesters have stopped a pickup and sent off its foreign driver, and has parked it near Alikilegefaanu Magu - Majeedhee Magu turn.

A policeman has been pushed off and assaulted while driving a motor cycle in Majeedhee Magu. He has left the cycle and fled scene following the attack.

In Majeedhee Magu - Alikilegefaanu Magu interesection; a masked man has climbed up the pole and sprayed the CCTV camera fixed at the top. A police vehicle that went by the area was brought to a halt and attacked. The vehicle has been damaged. The police officers inside the vehicle have been assaulted.

A policeman walking on the road where G. Kaneryge is located was assaulted by a crowd. The people gathered near the area halted the policeman and started assaulted him with weapons such as large sticks and canes. The policeman has since fled the scene.

“In order to execute the order issued by Hulhumale’ Court upon the Police to arrest and produce former President Nasheed to the court, for a hearing of a case currently being contested in court, tomorrow 6th of March 2013 at 16:00, former President Nasheed has now been taken under Police custody. Former President Nasheed was brought under Police custody at about 13:30 today after showing him the court order, while he was residing at G. Kenaryge. He however did not accept the court order. He was brought under police custody after being recited the statement written on the court order, and after verbally telling him all necessary legal notices. Police Integrity Commission and the Human Rights Commission have been notified that Nasheed has been brought under police custody through a court order. Maldives Police Service welcomes their monitoring of the manner in which the Police takes action regarding the issue. While Mohamed Nasheed is under the custody of the police, arrangements for his attorneys to meet him will be facilitated under the proper order.” – Police press statement

People have set fire to the cycle abandoned by the policeman who was earlier halted near the area.

Maldives Broadcasting Commission has condemned the attacks on journalists from VTV and Sun.

Maldives Journalist Association (MJA) has condemned the attack on a journalist from Sun and a reporter from VTV while they were actively covering the news at the scene when the police were executing the order to arrest former President Nasheed to take him into their custody.

Police have started announcing the warning that the they will disperse the protest near Male' City Council area. They have arrested people from the scene.

Kendhikulhudhoo MP Ahmed Easa has been taken into police custody.

16:47 - Police have arrested about 20 people from the scene of the protest near Male' City Council.

An old man fallen to the ground while being arrested. twitter.com/afxal/status/3…

Police attempt to arrest some protesters near Male’ City Council.

A government lorry just got rolled over, things heating up here... twitter.com/afxal/status/3…

17:16 – A government pick-up has been rolled over by protesters on Majeedee Magu.

17:20 – A van belonging to a shop owned by Eydhafushi MP Ahmed Saleem (Redwave Saleem) has been rolled over near Male’ City Council. The van was carrying goods.

17:30 - Overturned van at the intersection of Majeedee Magu and Alikiligefaanu Magu, with its windows broken and goods thrown on the street -- Sun photo

A van full of goods has been rolled over just now. twitter.com/afxal/status/3…

17:30 – Protesters have broken a window of the rolled-over Red Wave van, taken milk packets from the boxes inside and distributed them. Some protesters are drinking the milk packets.

17:34 – Riot police have once again arrived at the scene.

17:56 - Overturned van at the intersection of Majeedee Magu and Alikiligefaanu Magu, with its windows broken and goods thrown on the street -- Sun photo

17:35 – With the arrival of the police, protesters are seen running and gathering near Male’ City Council. Police are working at the intersection of Alikilegefaanu Magu and Majeedee Magu, where the protesters were gathered earlier.

18:00 – The police have said that objects such as bottles have been hurled at police officers by MDP protesters gathered at the intersection of Majeedee Magu and Chaandhanee Magu; and that they have arrested some people who obstructed police duties and refused to obey police orders.

18:13 – DRP and PPM have condemned the attacks on reporters while former President Nasheed was taken under arrest.

18:23 – The protest is under control and the police have left the area.

18:26 – People are still gathered in the area, but there are no clashes.