Will form a wide coalition if I get the PPM ticket: Umar 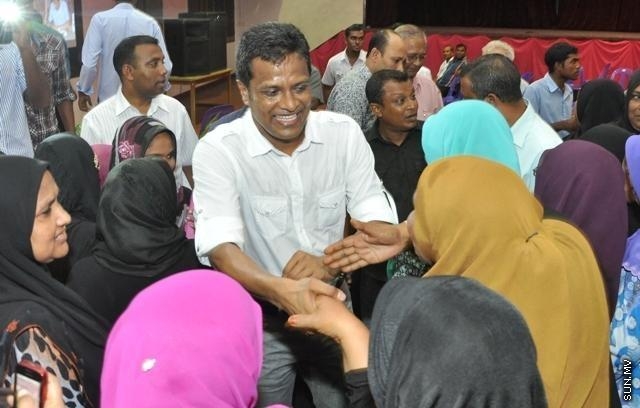 Progressive Party of Maldives presidential primary candidate Umar Naseer has said that he will form coalitions with a large number of parties if he wins the PPM ticket for the presidential elections.

Speaking at a campaign rally held in artificial beach last night, Umar said that a wide coalition must be formed if MDP is to be defeated, and that he will form such a coalition if he wins the ticket for the presidential elections.

He said that the coalition he makes will shock former president and MDP presidential candidate Mohamed Nasheed.

"It is not the way these days, to do things on your own. If you give me the PPM leadership, I will form a wide coalition, God willing. I will attain this country’s power through a coalition that will shock Mohamed Nasheed,” Umar said, speaking at his first campaign rally after being formally announced as a candidate for the primary.

Umar said that PPM being a big party, they have to take the initiative and reach out to other parties, and that working with other parties is not a sign of weakness.

He said that he believes that it was a mistake that Dhivehi Rayyithunge Party (DRP) refused to form a coalition during the second round of the 2008 presidential elections and that MDP might not have achieved power if not for that mistake.

“It is possible that Mohamed Nasheed could not have been able to get the last three years if DRP had reached to other parties and formed a coalition. It was a strategic mistake we did that day, to not work with parties. PPM shall not make such a mistake,” said Umar.

“If you deliver me the PPM presidential ticket, I will not make such a mistake. I will work with other parties, work with them to defeat Mohamed Nasheed. I will not travel all alone, to fall down and eat dirt,” said Umar.

Noting that there is the “fear” that MDP might come to power again and that there is a need for leaders who will work against MDP coming to power, Umar assured that he will make the effort if he is granted the PPM ticket.

“There is the fear that MDP might come to power again. They are planning it very well. They even have the money. They are still a threat. This country needs strong leaders. Because this country is still not rid of MDP’s threat. I would like to tell you that if you give me the votes and elect me, I will achieve this for you,” said Umar.

Person sentenced to 15 years imprisonment for possession of drugs